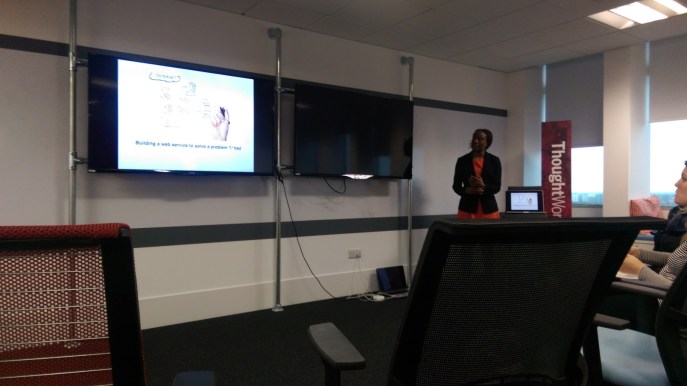 What amazing times we live in. Here is a picture of the audience at the Ladies of Code Manchester event on 27 June where I got to share my journey in building Assenty, the real-time Q&A platform over at assenty.com.

It’s mostly developers and would-be developers interested in turning an idea into a product. And all ladies!

Ladies of Code is an international community of professional women developers, formerly known as Ladies Who Code, in their own words:

“Through our series of global meetups, scholarships and conferences we support the technology leaders of today and tomorrow.”

Ladies of Code meetups take place all over the world and there are two in the UK, one in London and the other in Manchester.

I was invited to speak at Ladies of Code Manchester by co-organiser Danielle Haugedal-Wilson (@MrsDHW) who is also an architect at @CoopDigital. This is back in March after I met her at the ThoughtWorks #BeBoldForChange event which I blogged about back then.

I was thrilled to be invited to share my story on building Assenty from back of a napkin idea to minimum viable product and I spoke specifically about the ideation process, the changes the idea goes through on its way to becoming something people want.

Although I saw this blog post a few days after the event, I recommend reading it if you’re interested in building a product, and thinking about founding a company to do so as the author, Jessica Livingston of YCombinator, is renowned in the startup world for helping founders turn ideas into great companies.

Anyway, back to the event. Catherine Heath (@awaywithwords2) blogged my talk quite well here and posted some brilliant pictures!

Check out my write up of the June @ladiesofcode meetup at @thoughtworks https://t.co/jvCPETrHyq #womenintech #SoftwareEngineering pic.twitter.com/bZEH9Ol4sW

Test-driven development (TDD) is a software development process that relies on the repetition of a very short development cycle: first the developer writes an (initially failing) automated test case that defines a desired improvement or new function, then produces the minimum amount of code to pass that test.

Not something you would ever associate with writing a novel but Clare’s approach was to write lines of tests around the skeleton of her novel, and then write the novel as the tests pass.

A former maths teacher and self-published author with an incredibly interesting journey into software engineering, as shared in the tweets below, she came up with this process to help bring some order to her creative process.

Basically, the premise was, if she could automate the process of testing the structure of the novel as it was written, she would be able to identify when key parts of the plot changed dramatically because she was moving parts of the story around ‘out of order’

Tests describe what ought to happen. "If I had tests around my novel, I'd be able to refactor it" @claresudbery #Thoughtworks @ladiesofcode pic.twitter.com/qpnsLsbNeO

She shared how she re-read an already published novel she had written and wanted to re-write it – this frustration lead her to looking at testing the structure of later novels as they are written, to keep the storyline and its accompanying sequences coherent.

I had never thought of using testing for such a creative process and asked Clare about this during fun section we had at the end.

She said, and this was a big takeaway for me: you can always re-write your tests. They are not set in stone. And she’s right, re-writing your tests complement the creative process of writing new code to solve a problem. Both can, and should, go hand in hand.

We had some time at the end of the event for a live demo of Assenty, which I was rather unprepared for, to be honest! Here’s a video of it as it began.

And I’ve embedded the great questions from the audience as captured in the question board for the event below.

It was a great event and as Catherine blogged, there was also great food courtesy of sponsors Co-op Digital.

A big thank you to organisers Danielle and Laura Ionescu (@lauraionescu1), and Medina from ThoughtWorks who corralled us all into position on the night and made sure we were fed, watered and wired up to the tech for presenting (the presenters that is!). Thanks again for installing Keynote on your laptop just for me, Medina!

And it was also lovely to meet lovely people like Una Leahy (@Una_AHHVREH) who is starting on the journey of developing a posture app after years of working as an accountant!

Thank you Chi-chi, for the details, lovely to meet you too & to witness your enthusiasm & passion for all things tech !

If you’re thinking of developing a product, or just stepping out into software development, Ladies of Code are a great community to get involved in.

Were you there and spot any errors, inaccuracies or misquotes? Please shout out in the comments!