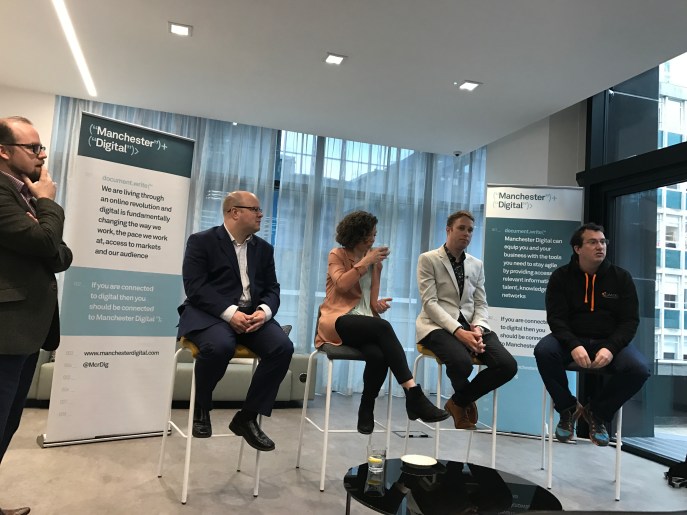 I was thrilled to attend the eighth Start Up Stories event put on by Manchester Digital this morning.

Manchester Digital is the industry’s trade association for the thriving digital & technology sector in the North West of England. It does great work in championing innovation in the digital sector and fostering a nurturing and collaborative atmosphere for startup companies in Manchester and beyond.

Startup Stories are a series of panel-led discussions on topics pertinent to startups, and this, the eighth event, took place at Manchester’s Digital offices just round the corner from China Town in central Manchester.

What follows are my notes from what turned out to be a fascinating group discussion on the value of innovation and originality in the competitive digital landscape we find ourselves in. If you were there, and spot any errors, misquotes or inaccuracies, please let me know in the comments!

The event, chaired by Richard Gregory (@SmartRich), Director of Tech North had a great lineup of panellists, neatly combining startups with venture capitalists and corporates invested in the startup community.

First to introduce himself was Tim Langley (@TimLangley), CEO at CANDDi, a lead generation Software-as-a-service (SAAS) company. An “eight year old startup”, in his own words, CANDDi is a bit of a veteran in investor circles, having been part of the Difference Engine accelerator, a forerunner for Ignite100, and having successfully raised equity finance. CANDDi stands for “Campaign and Digital Innovation”, catchy!

Second was James Mulvany (@jmulvany), Founder/CEO at Radio.co. A serial entrepreneur (my words not his), he started his first business aged seventeen and has been fortunate to not have had to work for anyone but himself since then. He originally had aspirations to be a DJ but ended up starting a company that focussed on the business to business radio sector.

Radio.co came about because his old business had a lot of enquiries from consumers who wanted to run a radio station. He saw an opportunity to create a user-friendly platform for starting and running an internet radio station after an internet radio technology deal with AOL ran out. Radio.co is a brand new brand in itself, and he spent a year and a half building it.

From the VC community was Samantha Deakin Hill (@samanthajdeakin) from Campus Capital, a VC that looks to run partnership with a number of the UK’s leading universities to deliver on-campus venture capital funds. She and her co-founder help early stage companies in the student community validate their ideas, and launch businesses. They were very big on experiential learning and get student VCs out speaking to founders.

The last introduction came from Matt Cooling (@mattcooling), UKI Business Development Manager at Cisco. He spoke about why Cisco supports innovation – they co-created and support IDEALondon, a “post-accelerator” that fosters innovation – and will be launching the Manchester variant, Mi-IDEA in a few months. Why does Cisco do this, Richard asked? So much innovation happens outside our doors, it seems crazy not to take advantage of it, was the answer.

It’s about making those connections with the wider community around innovation. Creating incubator and accelerator projects help to nurture a creative idea and the team that can solve a problem for which there is a market.

Richard asked the panellists to answer the question about innovation:

Tim answered by saying it was more dangerous to be completely unique than to be incrementally better. CANDDi is not an innovation. Do we do innovative things, yes.

Matt from Cisco was interested in a new idea solving an old problem, or an old idea solved in a new way.

It’s about turning it into a business. It’s so easy to create a startup, Tim added, it’s the sustaining that’s so difficult.

Richard asked the panellists about risk, what was the most risky thing they had done so far.

James from Radio.co shared how he had, just off the back of starting radio.co, started a content network called MCRLive. There’s a great synergy between the network and the commercial goals of Radio.co but it was a risky and costly venture – he had opened new offices in Manchester, recruited a team, all in recent weeks.
New businesses take calculated risks. Mindset was everything: “if you think, I’ll lose everything… you will”.

It was about knowing how to mitigate risk. His previous streaming contract had ended… a deal can go as quickly as it came in. He had to decide, do we go out and find more contracts or become innovative, as we’ve become stale.

Tim from CANDDi made a incredibly interesting point here:

what I’m doing may be perceived as risky but I know all the levers I’m controlling.

He shared about the ups and downs of running CANDDi whilst raising equity finance and the financial hurdles he faced. It was about knowing the worst case scenario and, “what we need to do today”.

The discussion went on to how you communicate risk, and innovation in the UK. Matt from Cisco shared about the differences between how the ‘post-accelerator’ model was run in the US versus in the UK.

In the US, the focus was the product, the market, the team. The attitude was to assume that you were going to make it.

In the UK the focus was “where is the risk?” Where is this going to go wrong?

He added, with startups it was about a confidence, an “I’m going to make it work” attitude. This is going to happen… regardless… That was critical.

Yes there can sometimes be the suggestion that there is a lower appetite for risk in the UK, or as Richard from Tech North put it, the idea that UK tech businesses are less ambitious: they take funding later and cash out quicker.

However Samantha countered that by saying that it’s like going into a marriage when you go into an investor-founder relationship. You needed to understand the risks. James added that there was a dark side to the Silicon Valley dream, with stories of founders committing suicide after raising huge sums of money they were unable to repay and quoted Gary Vee from this year’s SXSW:

unless you’re making a profit you are not a successful business.

It was interesting that Richard said that most of the successful tech companies in the region didn’t take equity funding. They were ‘bootstrapped’, or, in his words, “what my dad would say is running a business!”

In a sense it was

– my favourite quote of the event.

There was a real feeling of participation and engagement at the Start Up Stories event, and my notes above don’t really do it justice. Thank you to Katie Gallagher (@katiegallagher), Rachel Thompson (@rachietp) and the great team at Manchester Digital for putting it on.

It really was an excellent event and I look forward to attending the next one on 12th May, which is on bootstrapping vs investment funding, funnily enough!

I decided to write up my notes from the question and answer section using a question board created on Assenty, the real-time Q&A platform I’ve been building, and I’ve embedded a question from the board below.

Do check out the question board and add a comment if you were at the event. And see you at the next if you’re there!