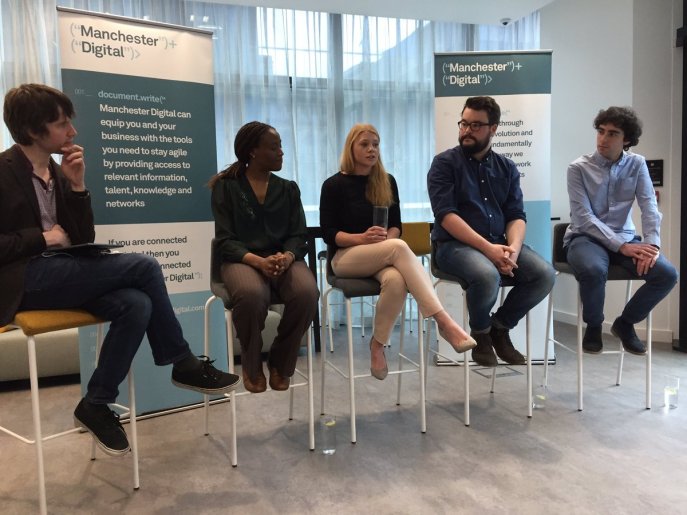 Last month when I blogged about listening to the speakers at trade organisation Manchester Digital’s eighth Startup Stories event little did I know that I would be speaking at the next.

Well, as it happens, I was fortunate enough to be on the panel of speakers at the ninth, money-themed Startup Stories, provocatively called Bootstrap vs Investment Funding – do you want to be Apple or Amazon?

An insightful discussion on the pros and cons of raising investment funding to start a company versus bootstrapping (aka starting a business without external help or capital), this event was chaired by Martin Byrant (@MartinSFP), community editor of Tech North and former Editor-at-Large at popular tech blog The Next Web.

During the panel discussions, I shared a little bit about my journey so far in creating real-time Q&A platform Assenty since starting out last January to solve the problem of answering questions from an audience at events.

Assenty has been bootstrapped from savings from working as a IT contractor and software engineer, and the generous support of friends and family. Despite the constraints of working with a tiny team, i.e. just me, the benefit of going down this route has been the ability to validate the idea in incremental stages with clients, most recently multinational professional services network PwC, and to add features as quickly as they are requested. It would seem that the focus on solving a problem has stood us in good stead.

From Lisa, I learnt about R&D tax credits and their value as a source of investment funding. Essentially, this tax relief by the UK government is designed specifically to support companies in their research and development efforts. UK companies can claim back 33 pence to every £1 spent on R&D with the main proviso that the expenditure is accounted for in the company’s books to begin with.

I’d heard about tax credits before but it was great to get a clear and nuanced explanation of how they worked and how they benefited some of Lisa’s clients at Forrest Brown who were able to use them to finance the development of projects that may not have gotten off the ground otherwise.

Sam’s company TickX is aiming to be the SkyScanner or GoCompare for events, providing discovery of and access to sought-after tickets for the discerning event-goer. With such a grand and global vision, and a big focus on user growth as a first priority, this has predicated that TickX go down the traditional route of raising equity finance from investors. The company successfully pitched on the BBC’s Dragons Den TV programme and turned down 3 offers from the dragons! As you can imagine, Sam had some great advice and funny anecdotes about how to navigate the sometimes murky waters of engaging with investors but more on that below.

In his role as chair, Martin did a great job of ensuring that the panel informed the audience about the options out there for raising startup capital.

I for one am thankful that Lisa and Sam reminded us of the UK government’s tax relief incentive for investing in UK startups – specifically the Seed Enterprise Investment Scheme (SEIS) which offers tax reliefs to individual investors who purchase new shares in small, early-stage companies. As elaborated in the tweet below, it means that investors do not necessarily have to be incredibly wealthy to support new companies. It’s always good to know about these options, whether bootstrapping or not.

Tom’s company Huddle has developed a business filesharing service independently without raising any equity finance. His journey is similar to mine in some respects in that he has a potential source of income from the work the digital agency does for clients. His advice on getting as far as you can without seeking external funding really drove home the fact that quite a few people ‘doing a startup’ these days will explore what they can do themselves first before pitching to investors.

Tom’s insights on how he has learned a lot of what he needed to know in starting a company and developing a product without needing to be part of an ‘accelerator’ or similar ‘startup incubator’ network demonstrates how far you can go with the commitment to creating a viable product.

Back to those anecdotes by Sam.

He shared how, by capitalising on the timing of the news, TickX were able to raise ten times more funding, £750,000, from Ministry of Sound than had been offered by the investors on Dragon’s Den. The process was not without its pitfalls however.

Peter Jones, one of the Dragons on the show disclosed some confidential information about the company on air during the filming of the programme. Thankfully, for TickX, the investor that was named was able to turn this to his advantage as well.

Sam, and Martin in his questioning, brought to light how time consuming the process of finding a suitable investor can be. This was the key takeaway from the event for me. They both shared two completely unrelated accounts of dealing with the same investor that ended up with a founder having to shut down his company when the investor pulled out the day before a funding deal was closed. Hairy stuff!

The idea that one should ‘always be raising’ if you go down the traditional equity finance route was a complete eye opener for me. It really drove home the fact that there’s much to be gained by focussing on delighting customers, whatever problem you’re solving. Do that as much as you can first, and then perhaps chase, ahem, approach investors when you have some evidence of market validation, and a route to income from customers.

Thank you to Manchester Digital for an exceptional event and for being the amazingly supportive network they are! I do feel for other cities that haven’t got an equivalent(!) Manchester Digital makes doing a digital startup in Manchester frictionless as far as growing a network is concerned. Keep up the great work Katie Gallagher (@katiegallagher), Rachel Thompson (@racheltp) and the rest of the team.